Every carpenter and DIYer will tell you screwdrivers are their most frequently used tools. Due to the fact that one screw cannot be used to construct a frame, deck, or even work on wood, you should maintain a set of screwdriver heads and screwdriver bits to handle any type of screw that may arise.

Most carpenters and DIY enthusiasts will tell you that screwdrivers are among their most frequently used tools. Different types of screwdrivers are required for different jobs, and it’s important to have the right tool for the task at hand.

Furthermore, you will probably find that you require both electric and manual screws for home maintenance and other woodworking projects. About to start building your toolkit? Here is a list of the different types of screwdrivers and their uses: 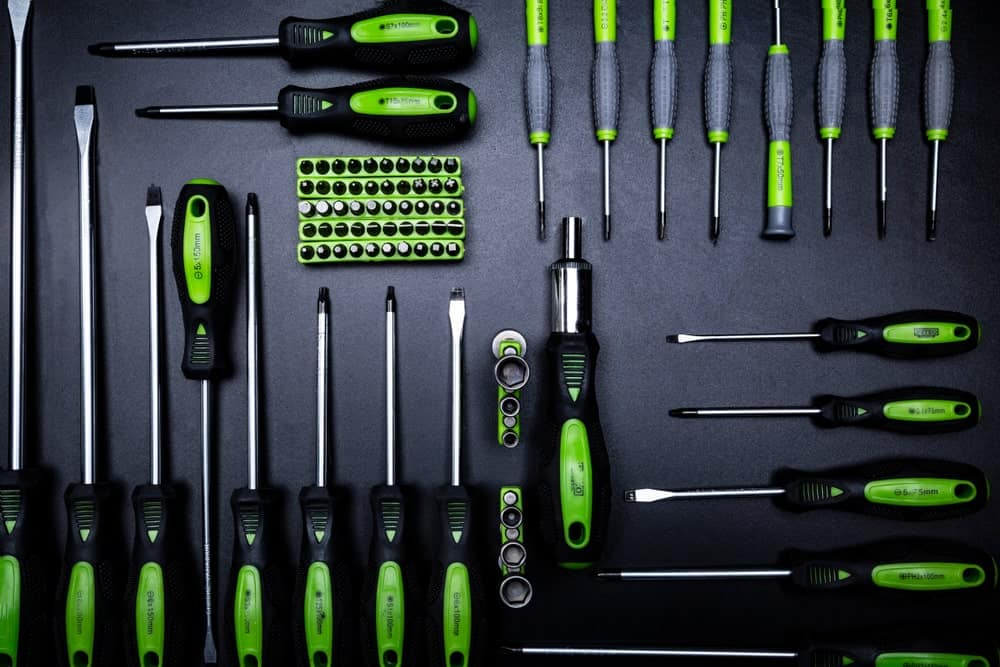 Here are the 5 types of screwdrivers every DIYer including you should know about.

In general, screwdrivers serve two main functions: inserting screws and removing them. There are different types of screwdrivers depending on their tips, which are designed for specific screw heads, but there are also variations in how they operate.

If you recognize these differences, you will be able to select an appropriate method of screwing, regardless of the type of screwdriver you use for the task at hand.

They greatly reduce the time spent lifting and repositioning the screwdriver tip as you turn it. Ball-bearing mechanisms inside the handle allow the user to easily turn the screw by waving his or her wrist back and forth.

You can adapt the screwdriver’s ratcheting action to insert and remove the screws by adjusting the button on a screwdriver.

A few manufacturers have developed power screwdrivers designed to work with specific applications rather than just the standard drill.

Upon pressing the screwdriver shank, the handle turns; releasing its results in the handle reverting to its original position. You can still buy Yankee screwdrivers at DIY stores even though they’ve been around since the late 1800s.

The most widely recognized version of this tool features a thick handle along with a cylinder-shaped steel shaft that ends in a screwdriver tip (which in some models has an interchangeable bit that can be fitted to different screw head shapes and patterns).

A moderate amount of twisting force is required to twist a screw due to the handle being bigger than the tip. While working with a manual screwdriver, you often need to take the screwdriver off of the screw head at the end of each turn and then reposition it right before each subsequent turn.

Drills have been fitted with screwdriver bits that can be exchanged for drill bits, hence it is a conversion drill screwdriver.

The strength of ribbed sides on screw heads allows them to hold solidly in wood, making them an ideal substitute for nails in many constructions and improvement projects. Powered drills/screwdrivers dramatically reduce the amount of time it takes to insert and remove screws.

These come with interchangeable bits of different sizes or types. Magnetic screwdrivers are magnetic because the bits are attached magnetically to the shafts.

It is most important to match the tip of the screwdriver to the screw head, regardless of whether you use a manual screwdriver or a power drill.

This article will discuss some commonly used types of screwdrivers which can be differentiated based on the screw head drive type. Let’s now take a closer look at each of them.

The screwdriver of this type is among the oldest available. Invented in Europe in the 15th century, this type of screwdriver is widely used today. As its name implies, the shaft portion of the screw has a single slot along the tip that engages with the head of the screws with slots only.

Manually or powered, it can be driven either way, but it is not often powered as the slotted head ‘cams out’ when powered. Now, what exactly is it? This occurs when the torque applied to the screw surface is too high, or the screwdriver isn’t properly centered, causing the screw to loosen from the head or to fall off.

Furthermore, they’re necessary to install outlets, switches, and any other instance in which nail screws shouldn’t be overtightened.

For ratcheting screwdrivers and drills there are flat-head screwdriver bits, but keep a few manual screwdrivers in your toolbox as well. They’ll be labeled not only with their size but also with the length of the steel shank.

There are a wide variety of tip sizes, from a fraction of an inch (perfect for tightening eyeglass screws) up to several inches (perfect for fitting industrial hardware). Select a screwdriver with blades that match the thickness and width of an exposed screw head.

During a time when the world was moving toward being motorized or powered, these Phillips heads (also known as cross-head screwdrivers) were the first steps toward making screwdrivers powered in order to achieve greater efficiency and perform tasks more accurately and consistently.

Henry Phillips invented them in the 19th century with the intention of introducing power-driven screwdrivers to numerous industries. When viewed from the front, these screwdrivers look like crosses.

A wide variety of woodworking and construction applications require the use of Phillips screws. If you need to install just one or two screws, a manual or ratcheting screwdriver will suffice, but construction projects often involve multiple screws. For the most efficient build, you should use a power drill equipped with interchangeable Phillip bit sets.

There are six straight lobes, just like a hexagon. Bolts are generally fastened with these instead of screws. Your ratchet box probably contains bits to tighten up or loosen nuts, screws, and hex bolts.

Therefore, there is no slipping or any cam-out effect when operating a motor driver, making hex arrangement bits a practical choice for use with power drivers. Such arrangements make production a lot faster and more accurate.

Bits and screwdrivers for hex-head screws range in size between 0.03″ and 3/8″. There are a variety of Allen-type screwdriver bits available for both ratcheting screwdrivers and drills, although most are L-shaped or T-shaped hand screwdrivers.

An inventor in Canada named Robertson invented the square screwdriver. As a result of engaging the square protrusion with a square opening screw, without involving any angle, we avoid cam-out effects and improve centering.

In today’s construction and remodeling industry, Robertson screws, with recess sizes ranging from 1/16″ to 3/16″, are widely used. Square recess screwdrivers are available in manual and ratcheting versions, but power drills are most commonly used to insert and remove the Robertson screw.

The slightly tapered shape at the front of the tool makes it more comfortable to use because you can lock the tool with the screw. This screwdriver type was first used by Ford Motor Company for industrial purposes because it speeds up production, reduces damage, and is a highly reliable driver.

Auto mechanics often use Torx screwdrivers since they are becoming increasingly common. Technicians often refer to them as star tips. There are six rounded lobes on the star-shaped tip of this driver.

Torx screwdrivers are designed with a circular geometry which reduces radial force and prolongs the life of screws and screwdriver bits.

Even with high driving speeds, these screwdrivers can transfer more torque with the same amount of force without any chance of tools slipping, unlike Phillips or Pozidriv screwdrivers.

Screwdrivers with Torx tips come in a variety of sizes, and their tips are divided into a number system such as T8, T10, T15, T25, and so on. Tooltips grow in size as the number goes up.

Can a Brad Nailer Use Staples?
Brad Nailer vs Pin Nailer : Which One Should You Choose?
Electric vs Manual Staple Guns: Which one is better?